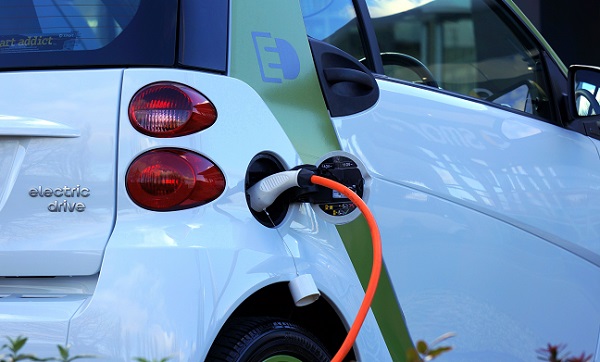 As low-carbon sources of energy (nuclear and renewables) become readily available, the world needs to rapidly transition away from fossil fuels.

Our calculation of the carbon footprint of a petrol car was based on fuel emissions from driving (an average of 52 km/day) and on the emissions from oil production (well-to-refinery).

The carbon footprint of an electric car is intrinsically connected to the source of electricity used to power it - its indirect CO2 emissions greatly depend on the country/state you charge your car. Considering the average electricity mix used in the U.S.A. and a total of 8.2 years/160000 km (time of battery warranties) an electric car with batteries between 100 kwh-30 kwh would produce less 37%-52% emissions than a petrol car.

We concluded that before deciding to buy an electric car you should check the percentage of low carbon sources (renewables+ nuclear) in your country/state. Except for a few cases (in which the electricity is provided by >70% from coal) buying an electric instead of a petrol car is a better option for the environment! :)

For more detailed information we ask you to read the full blog post. 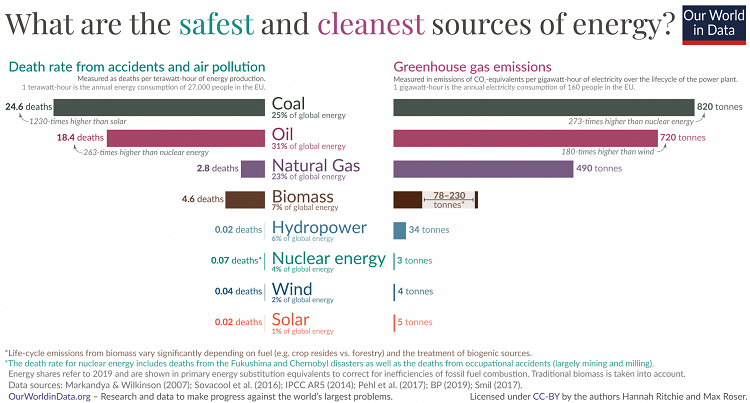 As low-carbon sources of energy (nuclear and renewables) become readily available, the world needs to rapidly transition away from fossil fuels.

The motivation to write about this topic came when I realize that from all the 22 actions included in our Changeit app that help people reducing their individual’s footprint, the single action with the highest carbon footprint is private car journeys. By committing to “Less car journeys“, people can significantly reduce their carbon footprint!

In addition to reducing our dependency on private cars, I wondered how much CO2 can you actually save by choosing an electric car instead of a petrol car.

During my research on this topic, I learn many new and interesting things which I am going to share here.

Come with me through a wonderful journey of batteries, oil and electric facts (see what I did there?)…

I was really surprised to find out how inefficient is petrol combustion. During the process of petrol combustion, only 30% is actually used for moving the car while the other 70% is lost in heat (chapter 8.3.2)!

In an electric car, around 80% of the energy consumed is used for the car to move - only a small percentage may be lost when charging (chapter 8.3.2 of this report). Moreover, electric cars are embodied with a system called regenerative braking in which every time you brake, energy is being absorbed and can be used later. Regenerative braking helps in extending the range of the electric vehicle by 8-25%. Apart from saving energy and enhancing the range, it also helps in effective control of the braking operation.

- CO2 footprint of a petrol car

The average-size petrol car emits around 196 g of CO2/km. By driving an average of 52 km/day a petrol car produces 306 kg CO2 per month.

Emissions from extracting crude oil from the ground, moving the oil to a refinery and making gasoline were calculated to be around 10.3 g CO2 per megajoule (MJ) of crude. (1MJ equals 0.0292 L of gasoline).

Considering a car uses on average 98 L a month (52 km a day, consumption 6L/100km), this means well-to-refinery and oil production emissions correspond to 34 kg of CO2/month.

Emissions from transporting gasoline from refineries to petrol stations are not included in this blog post.

Side note: Diesel cars will not be used for comparison in this post. Diesel cars emit less CO2/km but governments realized, later on, that diesel cars are not a good alternative to petrol cars, as they produce much higher levels of oxides of nitrogen (NOx) a chemical compound that’s hazardous to air quality and human health. Inhalation of nitrogen oxide species increases the risk of lung and colorectal cancer.

To accurately calculate the footprint of an EV one has to take into consideration both the footprint of producing the electricity that powers the vehicle and the emissions released during the production of the EV’s battery.

The carbon footprint of an electric car is intrinsically connected to the source of electricity used to power it - its indirect CO2 emissions greatly depend on the country/state you charge your car.

Electricity mix is the combination of different resources (coal, oil, gas, nuclear and renewables) that are used to supply energy to each country/state (see Image 2.).

Image 2. Bar graphs showing the average energy mix of USA, EU and China (Graph on the left) and the average energy mix of North East / South China, Germany, Poland and Sweden (Graph on the right). High carbon: Coal and natural gas. Low carbon sources: Nuclear and Renewables (solar, wind, biofuel, hydropower). Source: Analysis of the climate impact of lithium-ion batteries and how to measure it. July 2019.

Coal combustion is the most polluting fossil fuel followed by oil, and then natural gas emitting around half of coal emissions’ - but still very pollutant! (see Image 1).

On a positive note, the percentage of global electricity produced from renewable sources is increasing every year!

To check the electricity mix of each state in the USA and how much CO2 an electric car would emit per mile I used this website. To do the calculations I compared the American state that has the highest percentage of carbon polluted sources (West Virginia- 89% coal + 5% gas), to the one with the lowest percentage (Idaho- 20% fossil fuels) and to the average mix of the USA and Europe.

Therefore, because the electricity mix from West Virginia is the most pollutant then the emissions of CO2 per month (driving an average of 52 km a day), is nearly as high as using a petrol car.

However, in Idaho state where the percentage of electricity sources from gas and coal is only 20% combined, and 80% comes from renewables and nuclear energy, the carbon footprint drops by more than 10-fold (400 kg vs 36 kg of CO2 per month)! (See Image 3). 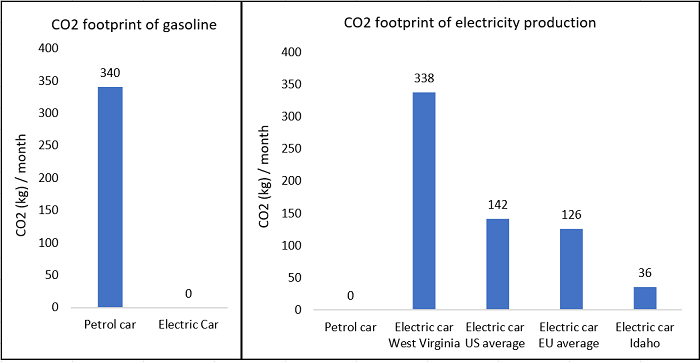 Using the average mix electricity supply of USA/Europe, driving an electric car releases 2.1x/2.4x less CO2 emissions than driving a petrol car. Considering an average of 52 km a day, one would reduce 198 kg of CO2/month in USA or 214 kg of CO2/month in Europe!

The CO2 footprint from producing a car varies depending on many factors, being one of them the size of the car (for example, production of a Citroen C1 emits 6.000 kg of CO2 while a Land Rover Discovery emits 35.000 kg of CO2). The main difference between petrol and electric cars is the additional cost of the lithium batteries used in hybrids and electric cars. The emission for disposal is also similar between both types of cars so those numbers will not be used for comparison. Therefore, only the battery of the electric car will be used to compare the differences in CO2 emissions between petrol and electric cars.

A comprehensive study calculated the cost of lithium batteries to be around 73 kg CO2-equivalent/kWh.

The CO2 footprint of the batteries per month (driving an average of 52 km per day) is: 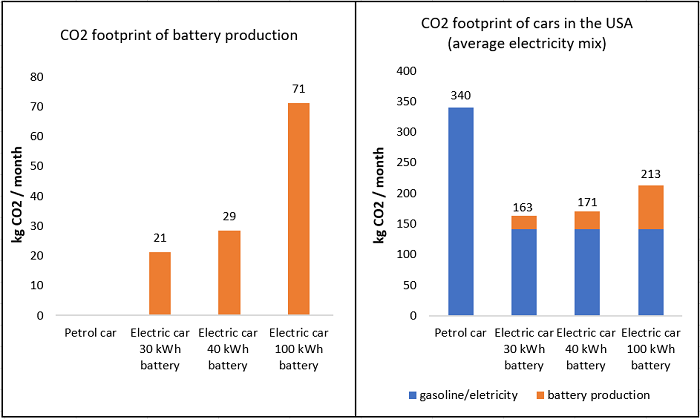 These numbers can easily go up to 60-83% reduction in CO2 in countries/states where around 80% of the mix electricity comes from low carbon sources (renewables+nuclear)!

Comment about hybrids: Plug-in Hybrid cars are powered by both a combustion engine and also a small range electric battery (<30 kWh) which depending on the car corresponds to a range of 20 km-50 km (chapter 8.3.2). If you drive more than that limit you will be emitting greenhouse gases because the combustion engine starts working. If you accelerate a lot, the combustion engine will also start working along with the electric supply. In line with the sustainable goal of the Paris Agreement, hybrids would not be a good enough solution. Having that said, if you use the petrol option very rarely it is, of course, a better option to buy a Hybrid comparing to buying a normal petrol car.

Except for a few cases (in which the electricity is provided by >70% from coal) buying an electric instead of a petrol car is a better option, environmentally speaking.

Furthermore, keep in mind that if you buy an electric car today, savings of CO2 emissions will likely increase over the years, as more and more infrastructures of wind and solar panels are being installed and coal plants are being shut down!

I know it might seem challenging to switch to a different type of car, with no sound and no gear but don´t let that get in the way of your sustainability goals! You can make the change! Let´s change it!

As electric cars can be a complex topic I decided to do a series of 3 blog posts in order to cover different aspects. If you want to know more about the environmental impact of lithium batteries or just how expensive electric cars are or how convenient is exactly the charging process, stay tuned for Part II and Part III, next week!

If you want to start living a more sustainable life, our app - Changeit - gives you simple actions you can start taking now to reduce your CO2 footprint. We designed our app to help busy people that want to fight climate change.

We compiled all the information in easy-to-read actions and notifications that will help you adopt more sustainable behaviors without taking much of your time.